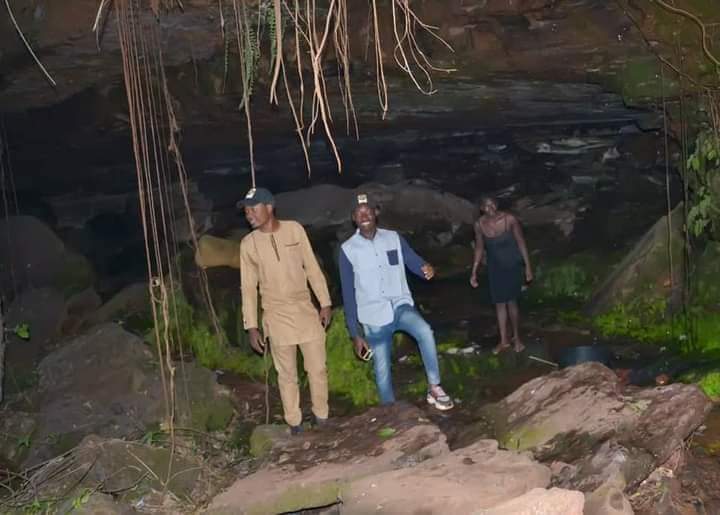 The land of Nsukka is replete with numerous tourist sites; however, one would be struck with the lightening of wonder on beholding and hearing the stories of Aku-Cave in Nkalagu-Obukpa.

Nkalagu-Obukpa is located in Igbo-eze South Local Government Area of Enugu State, Nigeria. The story of the founding of the community is quite interesting. Nkalagu-Obukpa, ab initio, was never Obukpa. Story has it that around 1860s, Itchi, a community in Igbo-eze South Local Government Area was invaded by the people of Ibagwa-Ani. The latter was stronger than the former and in a bid to avoid being overrun, Itchi had to seek for military assistance from Obukpa, a community that shared boundary with Ibagwa-Ani in the East of the latter. It was agreed between Itchi and Obukpa that Obukpa should permanently occupy the buffer land separating Itchi from Ibagwa-Ani and from there push Ibagwa-Ani backward. It was also agreed that whatsoever land that Obukpa could secure from Ibagwa-Ani should belong to them outright.

Over seventy warriors volunteered and headed towards Itchi. The route was from Iheakpu-Awka through Umuida in Enugu-Ezike to Itchi. Obukpa never fought war with Iheakpu-Awka and thus didn’t have issues with passage. It was an Obukpa woman married into Umuida that helped them pass through the soil and then landed at the buffer land given to them by Itchi.

Then began the beating of the mystical drum of Orieja Agada Ngara, the war deity of Obukpa and that of Nneumukwome, the principal goddess of the town. With this spiritual back up, they marched into war and secured the territory known today as Nkalegu-Obukpa. It is in this Nkalegu-Obukpa that Ugwu-Aku (AKU Hill) is located. It is within this Ugwu AKU that AKU CAVE is located harbouring springs of water fall. You might wish to know the interesting things about this AKU CAVE.

Immediately you climbed the hill westward, just look leftward, you’ll feel a cold region surrounded by thick trees and ancient African flora and fauna. Then you listened quietly only to discover the discussions and murmurings of waterfalls. You decided to follow the footpath already created by the inhabitants only to discover the slopeness of the place – you were descending down into a seemingly endless valley – so steep. Your heartbeat increased as the murmurings of waterfalls increased. The little children and the old women who’re there looked at you quietly.

Trees surrounded everywhere – tall and thick ones. They never made noise. They just kept quiet and also watched and listened to the murmurings of waterfalls. You could now see the pitter patter fall of the water under a massive rock that curved round like a well ripped banana seed, like the half-curve of the moon. The tour guide guides you and takes you down and down until you found yourself under the huge cave with rocks wonderfully laid in such a wonderful way that your instinct at that moment is to admire whosoever that created this wonderful cave.

WONDERS IN AKU-CAVE
Aside the mysterious waterfall, take a look below the cave, you’ll see an opening that stretches forth as a tunnel, albeit, a horizontal tunnel sort of. That opening surrounded by rocks under the cave open and closes on its own accord. According to the custom of the land, the hunters of the village hunt for AKU deity under the cave once in every two years. It should be noted that AKU is worshiped as a deity. Obukpa people are pantheists sort of. They believe that spirits inhabit some natural phenomena such as hill, trees, rivers etc. These supernatural forces are regarded as the essence of the beingness of those natural phenomena. Thus, the AKU cave is regarded as being controlled by AKU, the supernatural force that governs the place. Therefore, AKU has his rules.

That particular tunnel under the cave leads to another world where a different type of humans with different tongues (language) are found. The hunters who undertake such task of hunting for AKU would crawl through the tunnel for days. They eventually return back with many hunts. Each, as a matter of rule, must leave two of the game behind for AKU deity. Isn’t it a wonderful experience for you to take up this adventure to see another specie of human beings by visiting the cave and considering the tunnel?

But then, it should be stressed, those whose hearts are not pure never comes out until two years after the game; and even when they come out after two years, AKU would make sure they do not continue to enjoy this life with the living. Their spirit would leave this earth and return to AKU.

There are rules about these place. A woman in her menstrual period does not visit there or else, snake from nowhere would come and show you the way out.

MORE WONDERS OF THE CAVE
It was said that during the war, the cave protected the Obukpa people. In other words, it served as a refuge or a military barracks. Whenever one ran into it during those days of ancient wars, the enemy could never see you no matter what; and whenever the enemies dared ventured into the territory in search of the Obukpa people, one of the large rocks hanging over there would break forth and smash that person into pieces.

Under the cave, just on the rocky floor lay a massive rock. It is called ‘O Mee’r Anyinya’.
When translated it means, ‘The Destroyer of Horses’. Such names was given to the rock based on the anecdote associated with it. Stories have it that once a time the Igala people invaded there and took their horses to the stream for drinking and thereby defacing and defiling the strean that fed the Nkalegu-Obukpa people. As the horses bent over there lapping the waters, one of the rocks hanging over there got angry and fell on the horses and their owners. That was their end. The rest ran away like demons not looking back. That stone is the large stone that lay flat on the floor staring quietly at you as you stand there. However, the rocks have never fall on any of the inhabitants throughout its existence. If you come with good intention, you have nothing to fear.

THE WATERFALLS
The huge rocks usher down waters that quench the thirst of the people. Each of the rocks serve as springs sending down waters, you can call it springs of living water as many miraculous healings have been attributed to the waterfall. There’s the one called ‘O tiburi Iye’olu’ (the Breaker of Necklace). This spring falls with full force that if you wear any necklace, the force could break the chain off your neck. Stories has it that it has a healing power during the rainy season when it falls down angrily on sicknesses and diseases.
People were required to say their wishes and then allow the water fall on them. That’s the end of the problem as ‘O tiburi Iye’olu’ beats off and washes away your problems.

Don’t you think you need to visit this place even for once and enjoy the wonderful gift of nature? AKU CAVE of Nkalegu-Obukpa is a tourist site in Nsukka you’ll not miss.

BBHS Abeokuta: I wish all the old boys and the board of the school a successful celebration – Yemi Osibanjo

NIGERIAN STUDENTS TO ENJOY THE UNIVERSITY OF OTTAWA UNDERGRADUATE SCHOLARSHIPS FOR STUDENTS WORTH UP TO $100,000